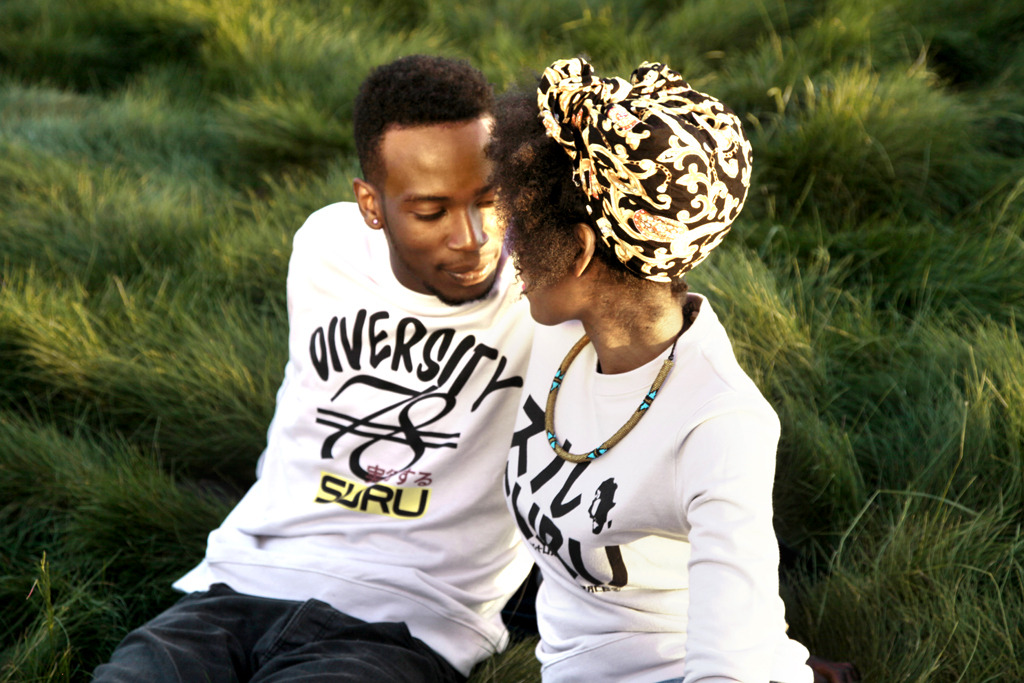 What is SuRu? by Amira Ali

Baba Afolabi, a Nigerian-born resident of Oakland, California, is the founder of SuRu, a premium apparel brand gaining popularity in the local pop-up fashion scene. Through the brand he introduces a self-made identity, contributing in a major way to the emerging local entrepreneurship and evolving arts, culture, and style in Oakland. More than a brand, in its origin, it is said that SuRu is geared to promote a (new) cultural phenomena, a way of life. A vision that speaks to identity, personality and character, while breaking down (self) imposed cultural boundaries built around notions of identity and community

In the contemporary world, as many local settings are characterized by cultural diversity we are pushed into ‘globality’. As migration is frequented we find, not just in the African context but also generally, more formations of new identities –creations of new culture based on new experiences. While owning up to the integrity and richness of their indigenous culture(s), Africans, more than ever, are refusing to a fixed and narrow idea of ‘African’ identity. To a greater extent, more are claiming identities that relate to their ways of living, beliefs and outlooks, shaped by their environment they inhabit.

The word SuRu comes from the Yoruba proverb surulere, meaning, “patience is rewarding”. During the founding process of the brand, while traveling through Japan, Afolabi discovered that the word SuRu in the Japanese language translates to mean: ‘to do’.  A different meaning though, joined with the Yoruba ‘patience’ the phrase ‘to-do-patience’ became the impetus behind SuRu.

The first time I came across the brand I experienced a fresh idea with a cosmopolitan flavor. In an intriguing fashion, the SuRu letters construct the Japanese characters in an Arabic calligraphy-like style, blending aesthetically with a Yoruba (Nigerian) idiom, all in one. An effortless sense of cultural diversity intermixed in a fashionably urbanized flair.

The SuRu buzz styled in its local setting can be felt in Oakland. For Oaklanders, where street styled garments are becoming the new cool, SuRu seems to fit comfortably. We recently caught-up with Afolabi to chat about the emergence of SuRu, his understanding of the word ‘diversity’, and his brand’s relationship with Africa.

We met at SuRu’s new pop-up shop in Uptown Oakland. A space full of vibrations made up with a young group of Ugandans, Sudanese, Haitians, Americans, and Nigerians. Investing their creative time in the brand while creating a new cultural movement and affecting contemporary American popular culture.

In the store azonto music is full on. Bikes and skateboards are parked to the side. Burritos are on the lunch menu. The store is full of colorful tees and sweatshirts with prints of giraffe meets football meets the world cup. Everything is displayed with an Afro-Japanese essence. There even is a (re) creation of the African continent, merged and sketched over the borders of Japan, dubbed ‘Japrican’.

“As SuRu was being introduced to the world it was no more than a dream to me,” Afolabi said, recalling how the SuRu dream was underway while he was visiting his longtime girlfriend in Japan. It was then, his relationship with a woman from another culture necessitated the act of understanding and being patient. The story of an African man and a Japanese woman, and their practice of a shared culture found expression in SuRu.

SuRu’s message is respectable in its civility booster in a multicultural society. Not to mention the promotion of inclusivity on racial and cultural identity, alongside its rebel-like nature towards self-imposed borders. An idea, perhaps, that translates fluidly with young Africans in the disapora and on the continent.

“It made sense, it’s not forced. It’s who I am and part of my daily lifestyle. I comfortably live a diverse lifestyle. An authentic daily activity, from the music I listen to, to the food I eat, and the type of clothes I wear,” Afolabi explains.

Currently, a central part of Oakland’s pop-ups, SuRu is outfitted for the long haul, poised to add to a larger storyline of Oakland’s “collapsed boundaries among subcultures” and the proclaimed budding arts, culture and food scene. Amidst the wary, SuRu is positively eager to contribute to Oakland’s creative-capital in a cutting edge way and shape the supposed “Oakland-as-Brooklyn” narrative. He also has plans to enter the African market and connect with its creative capital in the near future.

“At the moment, in Lagos, we are test producing on a very small scale short collared men’s dress shirts inspired by the Nigerian Muslim men’s dress culture,” said Baba. “However, my plan for the future is to establish a manufacturing plant and open storefronts in Africa. Though Lagos seems realistic in its familiarity, I don’t feel restricted; I will go anywhere in Africa with favorable business opportunities.”