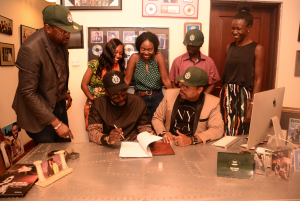 ​Multi-talented Kenyan singer, producer and multi-instrumentalist, Blinky Bill, stands out as one of the most unique artistes coming out of Africa right now. Being the first signee of Temple Management – East Africa, says a lot for Temple’s vision and the next phase of Blinky’s career that has been on an upward trajectory since going solo in 2016.

At the big unveiling and signing, Blinky said, “I have been working for a long time on my own music and it’s really good to have [Temple Management], a team that believes in me and the work that I do,” adding, “I am working on my album right now and it’s going to be lit and it’s really nice to be working with a team that will ensure that the album goes all the way to the top.” Blinky is on the verge of completing production of his debut album.

Having grown a strong brand while still under Kenya’s beloved group – Just A Band, Blinky released his debut EP: We Cut Keys While You Wait to massive successful and positive reviews. Blinky got signed to Temple Management on (insert date), making him East Africa’s first artiste to join the Temple family. He was unveiled at the headquarters of the Temple Management – East Africa, at their Nairobi offices. Speaking on the new addition to the Temple family, Troy White, the Managing Director says, “Blinky Bill is our first signing because he is one of the most creative artists on this continent. This brother’s mind and thought process and his music is the kind that can touch the world,” adding, “From the first time I met Blinky, I wanted to work with him. His mind is where my mind is and our minds are where Temple – East Africa and Temple Africa is at.”

In the next couple of weeks, Temple management will be signing more artistes and talent, set for revelation soon. Blinky joins a number of top African artistes signed to Temple Management. They include Iyanya, DJ Jimmy Jatt and the Mavins Record label family.

Bill Sellanga a.k.a Blinky Bill is a founding member of Kenya’s first electro-pop band Just A Band (JAB), celebrated for their eclectic exploration of genres including jazz, hip-hop and disco. From having a hand in producing all of JAB music including the smash hit “Ha-He”, Blinky has since evolved to become a renowned music producer and the magic behind some of Nairobi’s biggest bangers like his jam “I’m Feeling It” featuring Mayonde and Muthoni the Drummer Queen, and then “Party Nation” featuring Mayonde, Fena, MDQ, Kagwe Mungai and himself. Blinky’s latest music project “Atie” is a powerful piece of art including a video collaboration with Kenyan futuristic creative director Osborne Macharia.

Blinky’s music can be best described as a mix of futuristic African beats meets funk, hip-hop, electronica and hint of jazz. Today he undisputedly stands as one of Africa’s most creative music pioneers. He participated in the Red Bull music academy Tokyo (2014) and is a Ted fellow. In 2017, he was a key speaker and performer at Cape Town’s Design Indaba Conference, where he also performed at the Nightscape. He is currently in studio working on his first full-length project dubbed, ‘Everyone’s just winging it and other fly tales’ slated for a 2017 release.

Established in 2016, Temple Management Company has fast risen to become a global full-service talent and events management agency with its headquarters based in Lagos, Nigeria. They offer brands personal branding, marketing and PR, event planning, licensing, contract negotiation and social media management. Temple treats all clients as equal partners and as they strive to develop long-term strategies to enhance brand experience and success. Temple Management’s vision is to remain leaders in African talent and event management outfit, representing the best talent in entertainment, from sports, media and arts, among different frontiers.