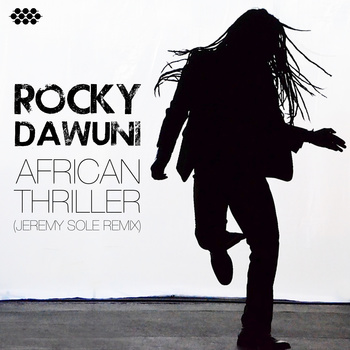 Rocky Dawuni is back to represent the continent of his birth. No North American sojourn can keep Rocky away from the call of natural positivity, rhythm and dance. So he went to work hard in the studio and with a concept for the lead track of his next studio album called “Branches of the Same Tree”. He has a new recording label deal an American-based world music company called Cumbancha. Rocky Dawuni is an iconic Reggae musician in Africa, North America and amongst World Music circuits. He is a child and product of the nation of Ghana. But, his music has taken him far from that West African nation. He has notched a comfortable music niche for himself. “African Thriller” has been remixed by Los Angeles DJ / Producer Jeremy Sole of radio station KCRW and Zanzibar Lounge in the USA.

The intro verse to the song chants .. “this be musical campaign, we go hit you without pain, some of you go complain’’. Perhaps this is a metaphor to one of boxer’s Muhammad Ali “thriller” matches.

Rocky portrays a hip boxing ring announcer. He is the ringmaster of gorgeous ladies and handsome men who simulate boxing but at the same time exhibit extraordinary acrobatic dance moves.
The video is vibrant, colorful, action-packed and does not allow you to take a breather by walking away. Shot in Los Angeles, the highly polished music video was directed by Glen Wilson and choreographed by Kara Mack. Captivating! Capoeira moves, Hip Hop and tribal bounces are all incorporated. Fully capturing the essence of modern Africa. Double dutch rope jumping and the multiculturalism if the actors in the video speaks volumes about his human reach.
As for the music, I hear hints of Afro-beat (In the Fela sense), traditional West African drumming patterns, Jamaican Dancehall riddims, modern Afrobeats, Soul, of course Reggae and even horn riffs that could be of Ethiopian origin.
The lyrical message is not so clear but it rings of positivity.
Contributed by Rab Bakari