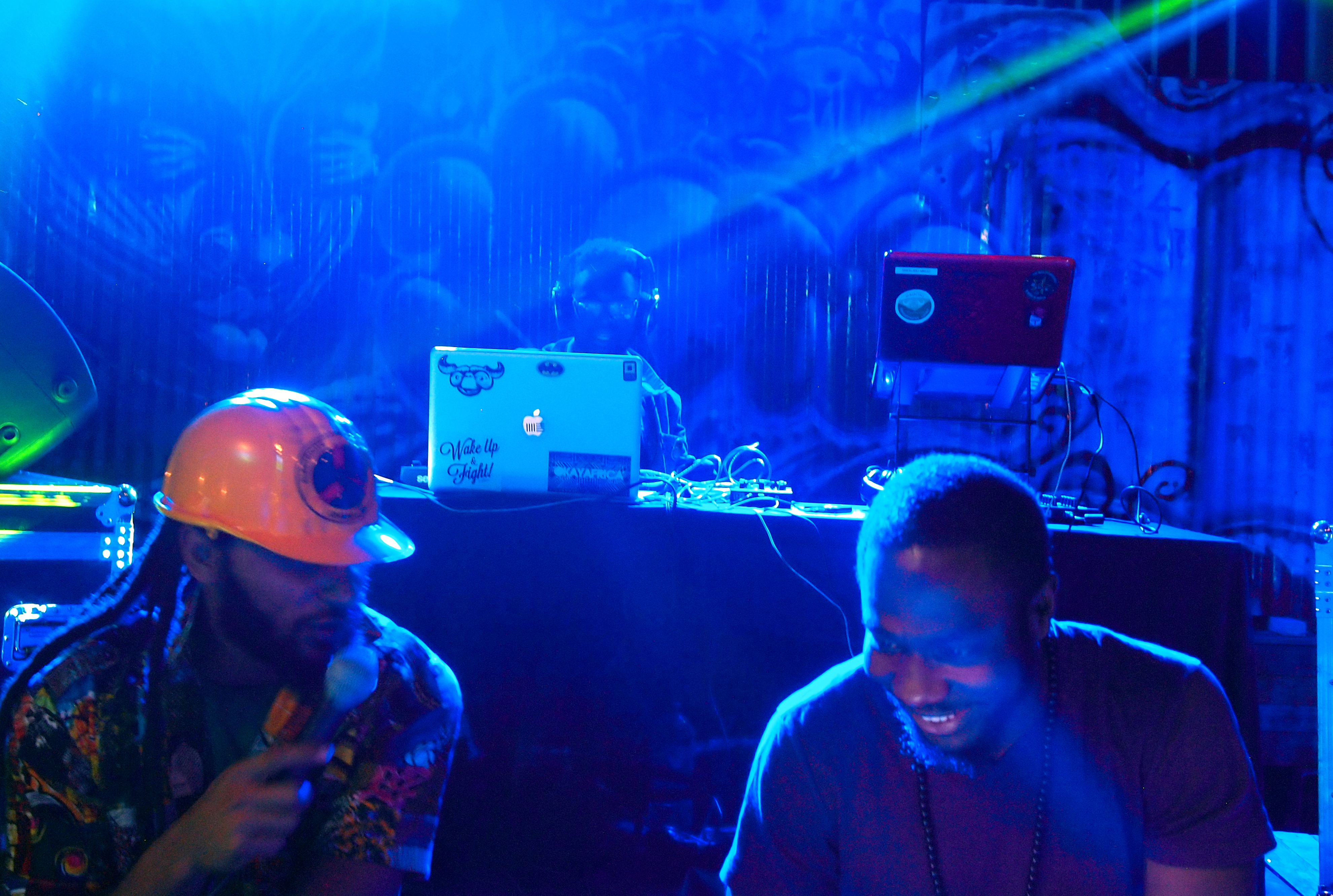 I catch up with the Outrageous Unapologetic rap duo the FOKN Bois some Saturdays ago in Nairobi for their view on the future of them and other African musicians in Africa.

The Bois came through to headline a benefit concert for renowned Kenyan writer Binyavanga Wainana. Binya recently suffered a stroke and as part of the activities for Kwani Trust’s Kwanilitfest, a literary festival that brings together writers from different parts of the world, a fundraiser concert for the writer was included as the climax.

In the cool ambiance of the Ghanaian restaurant, Mama Ashanti, Buddha Blaze (Kenyan music entrepreneur, the FOKN Bois and I had lunch while I asked them questions about their Nairobi visit, African integration and their exploits. The interview is done in English, Ghanaian English and Pidgin English:

I’ve been following your work and seeing you represent Ghana on the map worldwide. What is the reception of African music like and do you think there’s an audience for African artists away from home?

Wanlov: everywhere we’ve gone to perform aside from one show, the people who were bringing us knew what they were asking for. We can’t really use that to judge the reception; we’d have to judge the reception from people who don’t know anything about us in the first place. Before we go and do these shows, we’ve already been received.  It’s just maybe a few people in there are also worn over or disgusted but on the whole we just keep getting a string of back to back gigs, from other gigs we do.

What about FOKN Bois would disgust any audience?

Wanlov: oh M3nsa bringing a bouquet of flowers on stage, they find that very gay…it depends, someone may look at my feet and feel disgusted too (For Wanlov newbies, the artist wears no sort of footwear).

What are your thoughts about Nairobi so far?

M3nsa: this year has been a lot of trips to places we haven’t been before, so even just being in East Africa alone is an honor for us. Kenya is also special because of what it offers, yeah… what it definitely offers…like that, I mean look at that …it’s very offering (he points to voluptuous Kenyan lady in the periphery, my back was turned and at this point I didn’t know whether to steal a look or to continue with the interview, but M3nsa continued, so that saved me).

With the history, the essence of Kenya, as the cradle of mankind sef but Nairobi is traffic. It also functions in a way comparing it to Ghana, the structures function…it seems to be a much cleaner city, lots of trees, lots of greens, those are the things I look out for. Kenyans are an exceptional bunch of clever people. Very clever so I like that. We either clash or merge, but chale so far everything has been cool and on point you know. I love the weather and I haven’t seen one single church so I’m very happy…I haven’t seen a church sign board, there’s no borla (ed -garbage) around by heart like that.

M3nsa: and the trees, we see lots of trees. They understand the value of keeping the trees alive, merging nature with concrete makes it more beautiful

Wanlov: and here even though much concentration is not put on spices and stuff, it has resulted in healthier body structures because in Ghana because food dey jom, you dey chop for fun but here you eat for sustenance. Ghanaian girls as late as ten eleven pm, their mouths dey sweet them so they go and buy fried rice chicken and just be eating so their stomachs look like they’re in a constant state of pregnancy…two months pregnancy, ei three months sef. Here a lot of flat stomachs, wide hips so even if they don’t have big nyash because of the absence of stomata, the buttocks looks protrudal.

M3nsa: and there’s less weavery going on here, people really embrace natural hair, dreads, twists (Buddha Blaze adds that he had just been a speaker at a natural hair conference not too long ago). So these are just aesthetics, we don’t know how the intricacies of politics, public health services, education are…we’ve only been here for two days…these are just like face value kind things.

You’re headlining a Literary Festival in Nairobi, how important is the art of literature involved in your own art form?

Wanlov: it’s just as important cos our words are literature; we put just as much thought into the process of writing as in making the background sounds for the music that carries the words that we put together and I think we are here because they realize that we are writers in our own right. It’s very important to us, the way we arrange our words for instance, we position them in a way to evoke certain reactions and so on. We are writers and musicians so therefore literature is important to us.

Wanlov: as well as Mills & Boons (we all laugh)

M3nsa: But it also reinforces our purpose so it’s not strange that we find ourselves often being invited to these academic or literature environments I suppose.

Wanlov: Chale but me I go fit talk say in my life I read like fifteen books oo (laughs)

Wanlov: Walking around Jinja, sitting by the Nile and finally realizing that we’re about to do more within the continent shows. We are excited, for me especially just being in Jinja and Kampala knowing that there because of my music was very exciting because we do Europe aa tire, we do almost every country in Europe, we are still doing Europe.

M3nsa: Coming to East Africa alone was amazing, back in the day the flex be say hey we dey play for Europe or man just dey fly outside Africa but then man start dey see say there’s so much. I was just saying last night that you could be in a room with like eight girls, each one of them from a different country in Africa different governments, different and similar stories, I’m just blown away by their intelligence etc. You ask someone their name and they say ‘Ngoli’ or something and then there’s a whole history behind it and you connect it to yours. We are so close and so far and we just haven’t given our energies these opportunities so I feel like 2015 is the beginning of what is about to happen and for us FOKN Bois we haven’t done anything if we haven’t ‘conquered’ Africa cos if our music is to empower and our audiences are always a bunch of Europeans then what we dey do?

Do you have any challenges with immigration travelling within Africa?

Wanlov:  No chale so far the two countries we go, be visa free…so long as we mention that we’re Ghanaians we be cool.

M3nsa: Also I feel like things go change for the better soon as there’s talks of an AU passport for all Africans.

M3nsa: ah but London sef no dey do this oo?

What make we watch out for from FOKN Bois?

M3nsa: We dey want release a project before end of year- FOKN Ode to Ghana

Wanlov: Ebe some mixtape wey Okayafrica put out with various producers around the world mainly American using Ghanaian music samples to make hiphop beats so we downloaded it like two years ago and said we were gonna rap on every beat on the ‘Ode to Ghana’ mixtape and call it ‘FOKN Ode to Ghana’ as a free mixtape online and we’ve been trying to record it for two years but traveling and dumsor in Ghana and schedules and ‘beaches’ have slowed it down.

Heading from the lunch and going to the evening’s venue at the Elephant, we hope for the dry weather that has so far followed the Bois, to give us at least another evening of no rain.

People fill up the venue, I see the drinks and snack section which is filling with people, straw seats and tents just in case the rain frowns on us. The lighting and sound is ‘j3’ and DJ Gregg Tendwa is bumping some dope Afro electronic vibes behind the consoles

I would later open for the FOKN Bois during their concert as the first performer for the night. The people danced to my mix of Ewe and Pidgen English lyrics over Soul/Hiphop and other influences in the rhythms. Muthoni the Drummer Queen was next and had the Nairobi audience engaged as they sung along with her in her rap/spoken word style performance.

Blinky Bill was definitely a crowd favorite with his mellow flows that had the crowd drawn in and singing along. The jazzy tune ‘Winning in Life’ was on everyone’s lips.

FOKN Bois then showed up on stage to perform. The audience lost their minds! They danced and recited the lyrics of the songs. Socially aware lyrics mixed with sarcasm was evident in songs like ‘ Want to be White’. The NGO workers in the crowds (mostly white) were laughing hysterically to lines such as:

Nairobi is a melting pot of different people from all parts of the world and is constantly buzzing creatively. The mighty FOKN Bois have made their mark and warmed the hearts of Nairobi’s mixed residents. I look forward to more integration of art and artists within the African continent and if you’re in Accra you should check out their February event at Alliance Française

Delasi warms the stage and the hearts of the women as well; here he has support from Zawadi. Photo credit: @sikkelade